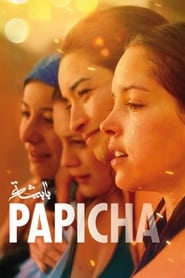 Algiers, 1997. The country is in the hands of terrorist groups, seeking to establish an Islamic and archaic state. Women are particularly affected and oppressed by primitive diktas, who seek to take control of their bodies and control their passage through the public space. While a frenzied hunt for women unveiled is launched, Nedjma, a young student passionate about fashion, is determined to federate the girls of her campus to organize a fashion show braving all the forbidden.