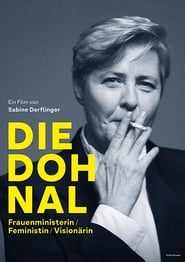 Johanna Dohnal, whose political career spans three decades, was one of the very first explicitly feminist politicians in Europe. As a member of the Austrian socialist government and the first Austrian minister for Women’s Affairs from 1990 to 1994, Dohnal was responsible for founding Austria’s first women’s refuge as well as criminalizing of marital rape. Yet her legacy remains yet to be discovered and re-examined. DIE DOHNAL makes a first step, and it makes Dohnal come alive.