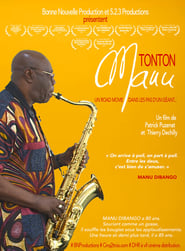 Manu Dibango is eighty years old. Smiling like a kid, he blows out his birthday cake candles, followed by applause. An hour and half later, he is eighty-five years old. Between these two milestone birthdays, the film directors followed in the day to day footsteps of this smiling, debonair giant; for whom the expression, "quiet strength" seems to have been coined. Composer, musician, journalist, an ambassador of the Francophone world, honoured and distinguished around the world; Manu Dibango has remained himself wherever he may find himself.